Detecting machine capabilities is just a matter of course in the MSX world. However, in Spectrum land, there wasn't much crossover with 48 and 128k games. Many just came on seperate tapes (or seperate sides of the tapes) and did not share code.

Some cleverly programmed ones, like Avenger, could detect and run the proper loader.

I tried to disassemble Avenger, but either the dump was bad (it wouldn't load the 128k version) or it uses some trickery I couldn't read. Either way I gave up and searched for my own way.

I couldn't find any discussion on this topic on the net, so I was left to my own devices. I came to realize one clear benchmark for 128 machines is the AY chip. As far as I can tell, no 48k machines had one, and every 128k machine did. Perfect!

Well, I tried a routine that polled the AY I/O port, but it doesn't seem to work. What I did not know is that unbound I/O ports will return floating values - about half the time it returns the value you're checking it against. This makes for very unreliable testing.

The other option is memory paging. I THINK this is what Avenger does - it definitely changes the ROM page to the 48k ROM. I did the following instead: 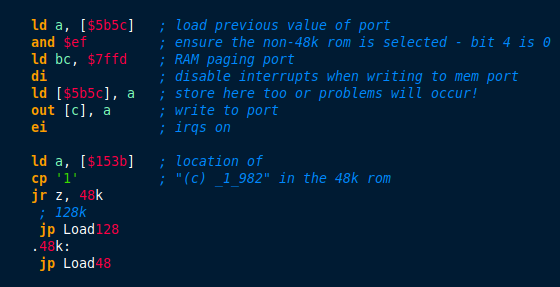 As a side note, a secondary check if you REALLY want to make sure you're not on a 16K should be fairly trivial - just find a string byte that is only in that ROM.

Since I can't find any info on this subject, anyone more knowledgeable is welcome to provide alternate solutions - but for now I like this one.

Side note, the gorgeous color scheme is Cobalt in gedit plus the z80 highlight scheme I found on ticalc.org. (install it to a -3.0 folder, not 2.0 like the Readme says).
Posted by shram86 at 7:26 PM No comments:

The common way to explain the layout of the ZX Spectrum's pixel orientation on its bitmapped VRAM is often quite convoluted and is oriented towards the values of each bit of the VRAM address - useful for plotting single pixels, but not for batch operations.

The Speccy VRAM can be visualized in a few ways to help understand how it's laid out:

This layout can do a couple things with the target VRAM address: 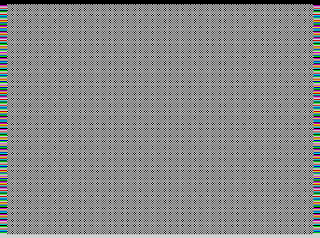 .TAP format is much easier to work with than .TZX, which seems to mainly be for duplication.

Each header and data block has its own 3-byte mini-header as specified by the .TAP format. It's very simple:

The filename must be padded with 0x20 to 10 bytes.

DataSize is the size of the data to load. All I know is that this value is generally 2 less than the BlockSize in the following data header.

When FileType is BASIC program (0):
Parameter1 is the LINE parameter when SAVEing the program. I actually have not gotten this to work, and since 1942 keeps it at 0, I do as well.
Parameter2 is the location of the start of the working area of BASIC variables. A bootloader generally does not have variables, so in these cases, this value is actually the same as BlockSize (or, DataSize+2).

When FileType is CODE (3):
Parameter1 is the target memory address (e.g. the first parameter after CODE), and
Parameter2 is ALWAYS 8000h. Not explained why.

And finally, the checksum byte. This isn't a checksum per se, so much as it is a bit toggling of all the bytes in the block, minus the header (including FileType). Start with the FileType flag byte and xor it with each successive byte, then store the final result in ChecksumByte.

For the data block, this is calculated for me using a Python script post-assembly with the following code:

And of course data blocks are simply raw data.

The trick was getting a BASIC stub to auto-run when you play the tape (harder than it seems when you're doing all the bytes by hand) and have that stub clear RAM and load/run the assembly program we want.

I couldn't figure out how to save a .TAP from the "speccy" emulator, so I had no choice but to open up a .TAP of 1942 and see what was up.

Then, the data block. This is where I had to detokenize the program by hand, and figure some stuff out for myself.

(Note that the best way to check the value of a token in any native BASIC version is to use PRINT CHR$(n). BASIC tokens don't overlap the standard ASCII byte space, so n is almost always > 127.)

The important thing here is that the single 0x0d byte represents endline in Spectrum BASIC. ZX80/81 use a different endline (0x76, maybe?). Don't look for 00 00 as endline or 00 00 00 for EOF like on other systems - afaict there is no concept of EOF in ZX BASIC.

A large difference between Sinclair and other BASICs is that Sinclair wastes a ton of space on storing numbers as strings, but condenses all spaces automatically. Here is the hex listing for my very short loader program:

And the corresponding BASIC:

CLEAR 32767 This sets BASIC's HIMEM to 7fffh. Doing this tells the ZX that the next time we load bytes from tape, they should go to the byte after this address (8000h).
LOAD "" CODE This is equivalent to "Load the next file available from tape as an assembly program (to the lowest point in memory I've allotted)". This will load the next chunk of data pointed to by a .TAP header in the .TAP file as a binary to 8000h.
RANDOMIZE USR 32768 This is, for some reason, the common way to start machine language routines on the speccy. This is equivalent to "JP $8000".

Also, the final line, RANDOMIZE USR n, is the sequence of bytes f9 c0. Whenever you see this in Spectrum BASIC its a CALL/JP command.

As mentioned above, I wrote a Python script to calculate the checksum bytes for me. Running it on the BASIC stub binary and a compiled asm binary I resulted in two .TAP files: one for the BASIC loader, and one for the hello world program.

.TAP is brilliant because you can $cat a.tap b.tap > ./c.tap and suddenly have a complete tape file. I tested b.tap with this binary code, assembling as-is with nothing else:

And it worked! With a little bit more work and bash nonsense, I have a one-click script that will assemble a ZX Spectrum .TAP image (with loader!) to an address I specify from a single assembly listing. 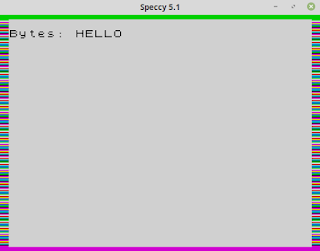